To sum up, the two-planet conjunctions can be divided into three categories, good, bad and mediocre in respect to money matters. The Yogas caused by the Sun-Moon, Sun-Venus, Moon- Jupiter, and Jupiter-Saturn are very good for wealth. Mercury-Venus is supposed to be exceptionally good. The Sun-Mercury combination is mediocre as it makes one unsteady in wealth matters. Mercury-Saturn is positively bad for financial health as it makes one contract debts.

One inherits paternal wealth if:-

a) Venus is associated with the 9th lord.

b) Venus occupies the 9th.

d) There is a mutual interchange between lords of the Ascendant and the 9th.

e) Ascendant lord and the 9th lord occupy a Kendra.

In general, a strong 9th house and the harmonious placements of the Ascendant lord and the 9thth lord, make one a beneficiary of paternal fortunes.

Venus and the 12th House

Venus is the planet for sensual pleasures, luxuries, and comforts. Unless one happens to be wealthy, one cannot live a life of ease and comfort, though there may be stray cases, where in spite of being poor, some have access to comforts. The 12th house is considered the seat of Ayana Sayana Sukha, meaning sleep and other bodily pleasures are conferred by the 12th lord and the 12th house.

According to general principles of astrology, the 12th is an inauspicious house and a planet in the 12th is generally a harbinger of inauspicious results. In the case of Venus, this rule is inapplicable, as explained by Ramanuja in his Bhavartha Ratnakara.

a) For a person born in Aries Ascendant, the lord of the 2nd delivers auspicious results while in the 12th, while for the other Ascendants, the results will be inauspicious (Ibid Chapter Verse 7)

b) Venus in the 6th will give rise to fame and affluence. It will give the same results in the 12th house also (Chapter 12, Verse 4)

The three points highlighted by the author of Bhavartha Ratnakara can be summarized as follows:-

The first point is that lord of the 2nd in the 12th is inauspicious in general; when the 2nd lord (ruling wealth) gets related to the 12th (house of loss), a nexus is established between riches and poverty, which is undesirable. For Aries Ascendant, not only is Venus good per se in the 12th but also is exalted. The second point, the author mentions is that Venus in the 6th is positively good for financial matters, overriding the general rule that a benefit in the 6th is not good at all. The third point, stressed by the author is that in general, Venus in the 12th will give rise to fame and affluence, meaning whatever is stated for Venus in the 6th is equally applicable to Venus in the 12th. Further, Ramanuj acharya says that much wealth will be earned if lord of the 5th is in the 5th or if the lord of the 9th is in the 9th (Ibid 2-2) while much wealth will not be acquired if the lords of the 2nd and the 11th are combined with the lord of the 12th (Ibid2-5).

Astrology is an ancient science whereas we are now living in the modern world. Contemporary writers on astrology have given various interpretations, which makes it possible to understand Astrology in the light of current trends. In their view, the 5th house is to be analyzed for predicting fortune in respect of entertainment and speculation — lotteries, races, and betting come under 5th house. Dowry, insurance, and illegal incomes can be understood from the 8th. Money earned through bribes, extortion, ransom or through illegal means is indicated by the 2nd, 5th,8th the 11th, especially if the concerned planets happen to be Mars, Rahu, Ketu or Saturn.

I have given a panoramic view of the astrological rules concerning wealth and how opposing rules can affect the prospects of wealth. A few case studies will illustrate these rules better.

Chart 2 is another classic example of prosperity. In this case, the lord of the 2nd occupies its own house aspected by Jupiter. The lord of the 5th in the 11th aspecting his own house propels the chart powerfully in the direction of affluence. Parvata, Bheri and Lakshmi Yogas are seen in Chart 2.

Chart 3 is that of a married lady settled abroad. Both the father and the husband are equally prosperous. She has lived a life of affluence from a fairly young age. This chart is an example of how Akhanda Samrajya Yoga can promote affluence.

a) One will become affluent if the lords of the 2nd and the 11th are strong and the above-mentioned Bhavas are also strong, provided the original houses are equally supportive of wealth. The Yogas mentioned in classical works, quoted here, augment the wealth quotient. In conclusion, it can be said, that riches flow to one in the period or sub-periods of wealth-producing planets in the chart.

b) The most important conclusion we can derive out of this dissertation is that the presence of wealth or otherwise in a man’s life is mainly due to the impact of Karma of earlier births rather than any special skill in earning money or due to the presence or absence of eligible qualifications or mindset to become wealthy. As in any other area of a person’s life, it is the planetary positions at birth which either make or mar the financial fortunes of one. • 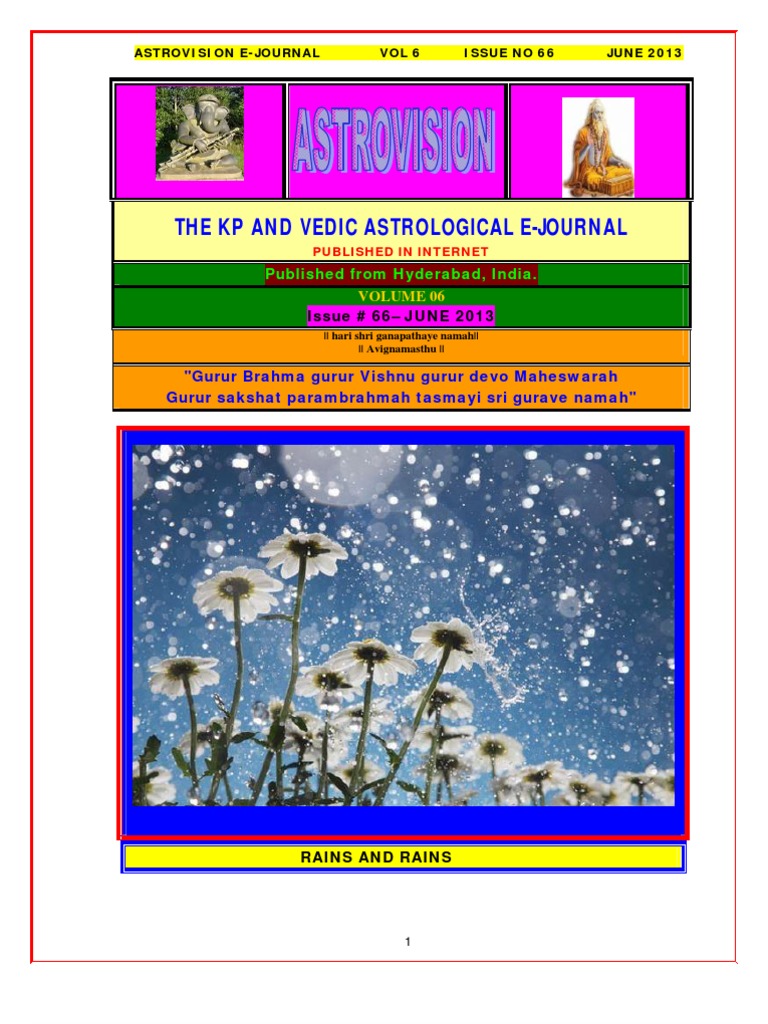 In Hindu astrology Ketu represents karmic collections both good and bad, spirituality and supernatural influences. Ketu signifies the spiritual process of the refinement of materialisation to the spirit and is considered both malefic and benefic, as it causes sorrow and loss, and yet at the same time turns the individual to God. In other words, it causes material loss in order to force a more spiritual outlook in the person. Ketu is a karaka or indicator of intelligence, wisdom, non-attachment, fantasy, penetrating insight, derangement, and psychic abilities. Ketu is believed to bring prosperity to the devotee's family, removes the effects of snakebite and illness arising out of poisons. He grants good health, wealth and cattle to his devotees. Ketu is the lord of three nakshatras or lunar mansions: Ashvini, Magha and Mula.

Positive Significations: There is a much deeper side to Ketu and it has been called the most spiritual of all planets. Ketu has been considered the planet of enlightenment and liberation. As the one who has “lost his head (worldly senses)” Being a personification of renunciation (torso without a head who needs nothing). Ketu the ascetic that wants to go beyond the mundane life and achieve the final liberation.