You and your Snapchat friends can view each others' star signs, as well as view your Astrological Compatibility. The latter is a “detailed compatibility reading,” showing the intersection between you and your pals’ birth charts together. And yes, that also means you can do the same for the cutie you’ve been chatting to till 2am every day. Snapchat users can also check their compatibility with friends using astrological predictions. It covers five aspects, including attraction, intensity, tension, support and harmony.

All is written in the stars. And now, also, on Snapchat.

Snap has just built a full-fledged astrology app within Snapchat itself. Beginning Thursday, users can access their detailed astrological profile — including analyses and personality explanations of their sun, moon, and rising signs, and the positions of the other planets in the solar system — by clicking an icon in their Snapchat profiles.

The feature is social, too. Click on the same astrology icon in a friend's profile, and you can tap through a similarly detailed astrology compatibility analysis. It's all presented with Bitmoji, swooshing and twinkling planetary backgrounds, and easy-to-read insights. Tapping a button in the upper right hand corner of a card lets you send it to friends.

To get to the feature, you'll have to update to the latest version of the app. Next, click your Bitmoji icon in the upper left hand corner of the app, which takes you to your profile. From there, click on the star sign icon below your name, and you'll be prompted to opt-in to the astrology feature by entering your birthday and time and place of birth. Once that's done, your star chart awaits.

You even get an 'Astrological Profile' that shows you your dominant 'Elements,' 'Modality,' and 'Polarity.' That's 13 slides just for you to learn about yourself — much more than a simple sun sign horoscope reading. 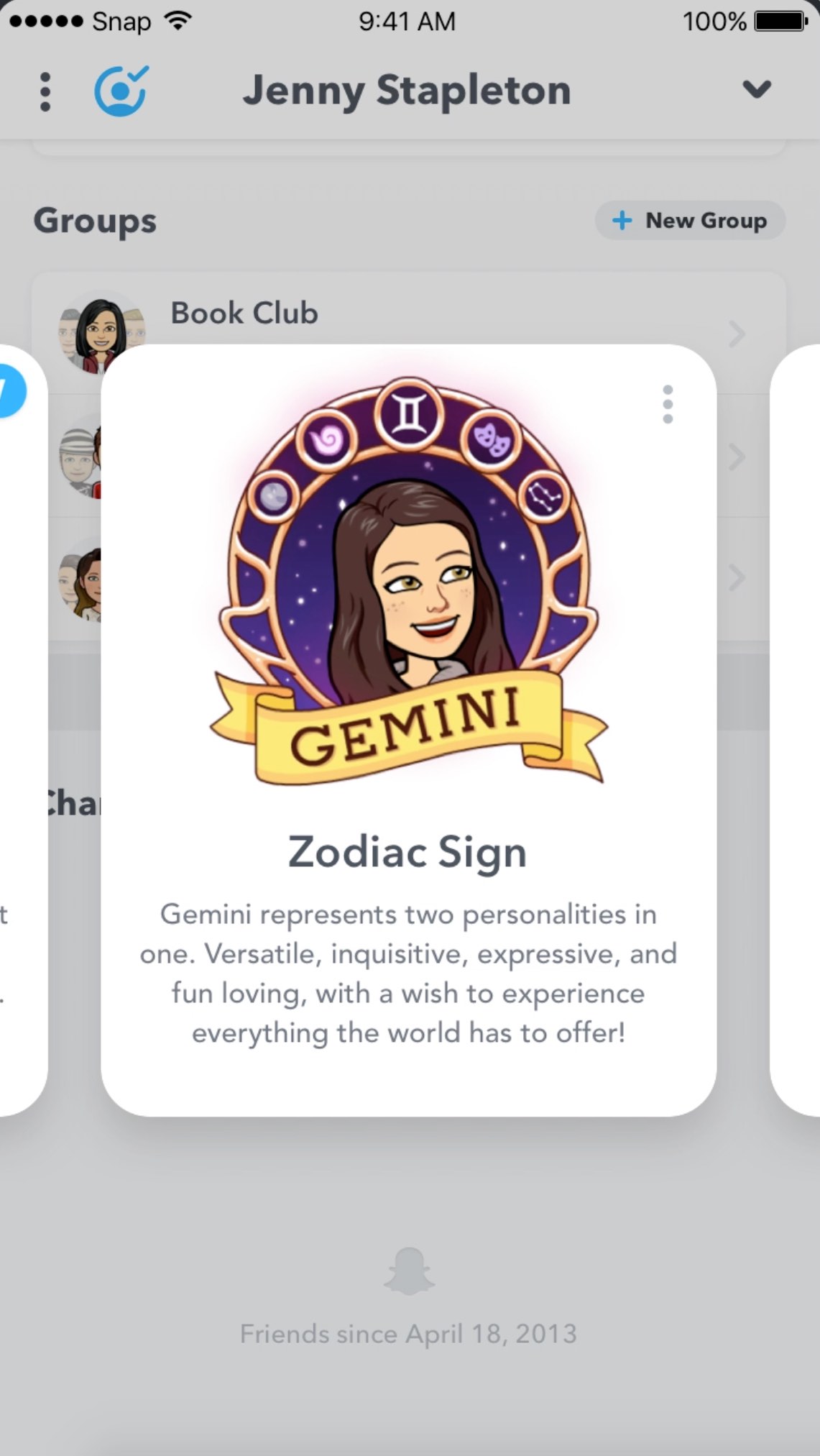 Snapchat hopes that the features will help friends have more meaningful conversations with each other. Whether or not you're an astrology devotee, the company sees it as an accessible way to talk about topics like love, friendship, fears, or goals, that are sometimes difficult to broach. Also, astrology is insanely popular right now, and generally pretty fun whether or not you take it seriously.

Aside from the concept, the product itself is impressive in its scope. Like some of Snapchat's other features that let you identify a plant or find out the breed of a dog, Snapchat could have just pulled tools and information from an existing astrology app.

Instead, engineers built the product from the ground up. It features over 700 unique cards filled with 'star chart analyses powered by expert human astrologers in close consultation with our product team.'

'We had a team of engineers who got really, really deep into astrology,' Jeremy Voss, Snapchat's product lead for the astrology feature, said in a call with reporters.

Snapchat plugs into an existing astrological database that finds out the position of the planets in the sky, to give users their signs and personality readings and advice. As Snap pointed out, there's an almost endless number of combinations for users' own readings and their compatibility. No wonder the engineers became so obsessed.

Of course, other astrology apps or apps with astrology features have risen to popularity in recent years. Notably, Co-Star has become a go-to dispenser of (sometimes harsh) life advice and romantic analysis.

However, some of these apps require more than an entry level knowledge of astrology to find them meaningful. Snapchat's astrology features are particularly accessible, in that they give you deeper plain-language analyses of your own chart and compatibility, rather than just telling you what your signs are and which planets carry influence in your life. This is important, considering many users who aren't particularly into astrology might stumble upon the feature while exploring the app, or get sent an astrology card from a friend. Helpfully, while you're scrolling through your star chart, you can scroll up to see a different card that explains, for example, just what the heck a 'rising' sign is, anyway.

The Snapchat integration could also help make divining astrological compatibility less, well, awkward. If you add someone who you're flirting with on Snapchat, they might have already enabled the astrology feature, so you can automatically check the vibe between your signs — no longer will you need to ask for the time and place of birth of someone you just started talking to on Tinder.

Snapchat's astrology features might be more simplistic than other apps, but their accessibility — both within the app, and the way that they are communicated — makes up for that. Call it yet another digital gateway to the stars. Snapchat users will have no trouble walking through.

Snapchat has just introduced a brand new feature called an Astrological Profile, and it’s about to fill all your horoscope needs. Here’s exactly what it is and how to use it. 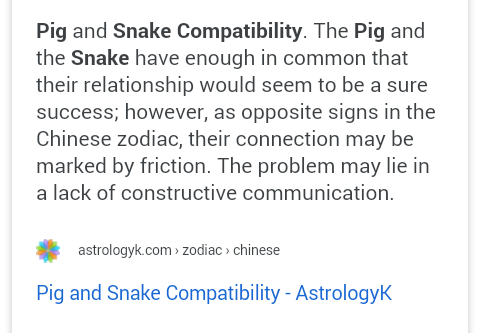 If you’re a fan of all things astrology, zodiac, horoscopes and star signs, then the latest update might just be the most exciting of all as Snapchat has just introduced the all-new Astrological Profile.

Here’s everything you need to know about the new feature.

What is Snapchat’s Astrology Profile?

On November 12th, Snapchat just launched a whole new range of astrology based features that are all accessible on your Astrological Profile.

Once you set up your Astrological Profile, you’ll be able to access a whole welath of information that’s all related to your star sign.

Every day, you’ll get a daily horoscope which will include an analysis of your zodiac sign, an explanation of your personality traits and information about your sun, moon and rising signs.

Also, if your friends have set up Astrological profiles, you’ll be able to get compatibility readings. Using both of your signs and information about your personalities, Snapchat will assess your compatibility with each other.

Basically, your Snapchat Astrological Profile is the place to go for all your horoscope needs.

How to set up an Astrology Profile

First, make sure that your app is updated to the latest version. How to reduce malefic effects of planets.

Following the new Snapchat update, lots of people have taken to Twitter to react to the zodiac features, and it’s safe to say everyone’s pretty obsessed with it.

One Twitter user said: “I’m not really into astrology and things like that but that horoscope thing on Snapchat was spot on.”

“Snapchat has a new astrology thing I just found and that’s so cool,” said another.

Another person said: “Thank you snapchat for normalizing astrology. Maybe in a few years nobody will think I’m weird for randomly talking about it.”

The new feature has had a great reaction from users, and Snapchat are likely to expand the Astrological Profile in the future if it remains so popular.

In other news, Twitter reacts to KTVB's Mark Johnson tweet: Why this Idaho reporter is internet famous!